I tried to move from a 2012 MacBook Pro to a 2017 iPad Pro (before iPadOS), just to see if it'd work. I thought it'd be cool. My justification: iPads are so powerful. Insanely so! I could easily lighten the amount of things I do. Plus, they have a few perks, like being lightweight, having always-on 3G and being perfect for having fun.

In summary, I couldn't do it. I loved the hardware, but deal-breakers were a) being limited to Safari, with no alternatives, b) no system-wide ad-blocking, and c) difficult file management.

Read on to see if you'll experience the same. Of course, you might find other legitimate reasons to get an iPad Pro now that iPad OS is out.

A bit about me/my specific use cases

I’m fairly tech-savvy (not an engineer, but trained as one… apparently not very well because I’m not one full-time). I blog, write barely functional code (JS/HTML), use remote servers via SSH, edit raw photos from a mid-range camera (a high-end Sony all-in-one), and of course do email, chat and too much social media. I also trade stocks and futures on Interactive Brokers. So I'm not making movies or iPhone apps, but nor am I just doing email - I'm in between.

The hardware I tested

How I did the test

I actually just sold my MacBook. I didn’t even have it as an option. If I were desperate, I still had my work laptop. So for about a month, I did all my personal stuff exclusively from the iPad.

Where the iPad Pro Beat the MacBook Pro

These things last forever. I would hop between cafes and tasks and never need to recharge until the end of the day, overnight. Whenever working during the day on a MacBook or any laptop I’ve needed to take a charger “just in case”.

The iPad's External Keyboard was Better

The iPad keyboard is terrible. But the external Apple Bluetooth keyboard is GREAT. Bordering on TOO much action. Better than most MacBooks I’ve tried (especially those with the new butterfly-style keyboards). The part I didn’t like was having to take out the batteries to avoid it waking up the iPad. This was actually annoying… but I think I could find a middle ground with the cover keyboard that you can buy from Apple, so I’m leaving it as a pro overall.

This is subjective. But Macs feel like work to me, mostly because I work in a fancy tech company (Lyft) that uses them for daily management work. This was truest when I was doing something like watching a movie on a plane. Watching a movie on an iPad is where you’re most in the zone!

The iPad is a Great Display to Read Off

Reading recipes off it without worrying about the keyboard was great. Watching things on it while resting it on a stand was great too.

Automatic connection to Airpods, sharing Wi-Fi effortlessly, being connected to my Home lights… all that stuff was ‘magical’ per the vague Apple promise. I enjoyed that.

What Was Just Fine About the iPad

Most Websites Work Fine on the iPad Pro (but Some Don't)

Most websites worked fine in the browser. However, because of the quality of apps for iPad, for my most regular daily stuff (like banking, trading, etc.) I often used a dedicated app. Websites would be for web-only content like blogs, forums and google searching "high quality affordable light sabers".

It’s nice that Adblock works in Safari. That was pretty much mandatory for this test to even work. Unfortunately it means I have to live in Safari, not Chrome.

The Apps on iPad Are Great (or at least fine).

Some apps are great, most apps are at least fine. I spent most of my time in apps for most activities, like banking, editing documents, email, blah blah blah. The catch is that they usually lack something you can only do in the browser. But when you’re desperate you can just open Safari… usually.

What didn’t work on the iPad Pro (Deal Breakers)

Some websites didn’t work (and there was no app, or the app wasn’t as good)

This was rare, but came up, and was super annoying. The times I remember most were:

Some I'd be wary about would include things like Bubble.is (making web apps), rich blog editors in Wordpress, site makers like Squarespace or Wix (without using their apps), Google Scripts to code scripts, etc.

Browsing With Many Tabs on an iPad is Not Fun

I KNOW we all like to have a billion tabs open and go back to them. Even if I simplify, I still usually have around 10 tabs open. While the iPad Pro has a relatively large amount of memory, iOS still hates you for this. A few tabs is fine. More than that, and expect that tabs will reload every time you move between them. More importantly, it’ll just be slow to switch between them.

Some things were just… slow

Typing caused random errors, browsing was slower (Safari for mobile isn’t as good as desktop Chrome for raw speed), editing docs in Google Sheets was painful (even for just data entry). Actually this is its own thing:

Google Sheets on the iPad is Slower and a Deal-Breaker

Editing or inputting data into Google Sheets was slow, painfully so. While the app is very rich, the way you interact with it via keyboard is slow.

For example, every time you hit enter to finish entering data, the sheet moves around. You have to keep adjusting to keep in the right place.

Or to do some edits, you have to reach up and touch the screen, and can't use keyboard shortcuts or a convenient trackpad/mouse. I tried to get used to it, but it just was slower after weeks of trying.

I can’t even imagine making a model using an iPad — even a simple one. This was a deal-breaker for me. I need to make models for so many things, from my own startup ideas to tools I’d use for business management.

It’s cool and all, having two windows open, but dragging things around with your fingers is not as effective as the keyboard shortcuts that Windows invented and that you can copy for a Mac.

There are so many places your files can go. I didn’t really have a framework for where I should put my raw photos, working documents for online or offline use, etc. I’ve worked with a lot of different devices, and this one isn’t thought out from a UX perspective.

And this isn't because I'm an idiot. I get around Windows, Mac and Linux file systems (using both the visual browsers and command lines) fine.

Typing is Terrible on the iPad when I forgot the keyboard

I forgot the keyboard a couple of times I went out for the day and had to get by with the on-screen keyboard. Typing is central to existing with a computer or tablet. It’s basically a non-starter to not have one there all the time. If I did this again, I'd get the keyboard cover.

I don't like being forced into the Apple data-sharing ecosystem

Safari is so much better than Chrome for iOS (it supports Adblock, seems faster, and the automated password management works better as it also integrates with app passwords) that I felt obligated to use it for the proper experience. But I didn’t like having the choice taken away from me, knowing that Chrome is better on almost every other device (Android phones, Windows computers, Apple computers).

Overall, I couldn’t do some things on an iPad, and I was less productive with other things. I concluded that an iPad is at best a secondary device and couldn’t be my primary. And I’m not that THAT demanding. 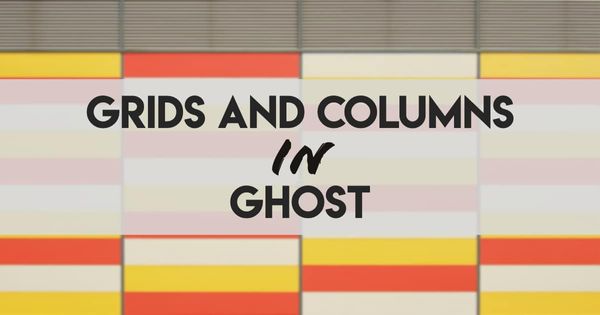 How to use grids and column layout in Ghost Koenig editor, for a two-column or three-column layout. Works in Casper or any theme without Bootstrap!

How I launched Pilgrim Coffee, going from an idea and no clue to an app in the App Store in 2 months.