I decided recently, in Feb 2022, to go all-in on Jiu-Jitsu, also known as Brazilian Jiu-Jitsu or just BJJ (or JJB in French).

For me, going all-in, means always making sure there's a gym nearby that has lots of high-level practitioners and lots of classes, attending them 5-6 times a week, and taking a serious approach to studying the discipline.

For anyone not getting an earful about BJJ from me (I try to hold back!), Brazilian Jiu-Jitsu is a grappling martial art. The focus is on taking your opponent down and then stopping shy of choking them unconscious or injuring a limb or joint — called "getting a tap", when they tap out.

The focus of BJJ is usually technique first, then stamina, strength, mobility, and speed, in some order. You can usually overcome technique with one of the others (especially strength), but for fans of the art, technique is always first.

BJJ incorporates a lot of ground fighting, and over time is absorbing parts of Judo and wrestling.

My priorities in starting BJJ were: 1. to stay fit and get fitter, and 2. connect with people all over the world. It's a bit like many competitive sports that have global communities, but I just liked the sound of the Jiu-Jitsu crowd.

As I got into BJJ though, I quickly fell in love with it, and am dedicating the next few years of my life ot it.

I originally wrote this as a declaration that I wanted to get to Black Belt quickly, but I've also realised that over-obsessing about belts is likely to lead to dissatisfaction. I'll just let them come as a surprise.

Still, I'm going to act in the way that lets me progress as quickly as possible.

How do people progress quickly in BJJ?

The short answer is: A lot of practise, understanding your weaknesses, and focusing on them without getting hung up in egos.

Advice given to a lot of newbies is to focus on positions and retaining your guard before you focus on submissions. Submissions are fun, but they're easy to get once you have done all the hard bits of getting into the right position.

People often measure progress in martial arts by belts. But there are pitfalls in this.

Firstly, belts are a semi-objective indicator of proficiency in Jiu-Jitsu. They're not easy to get.

For those who persist, getting to black belt typically takes anywhere from 10-15 years of fairly consistent training. Yes, that sounds like a long time... it is! Consistent training means training 3-4 times a week and generally trying to improve.

In many other martial arts (the ones that have belts, anyway), getting to black belt can be trivial. At an extreme level, in kids classes in some schools, if a child shows up every week and the parents pay the tuition on time, the child will be awarded a black belt.

Of course, belts only mean whatever you want them to mean.

In Jiu-Jitsu, at least half the training you do (even in the early years) is 1-1 grappling. In class, we go at roughly 70% of a full intensity competitive roll. As people progress through belts, they spend less time learning from instructors (though there's always something new to learn — I see the older black belts even listening to the newer instructors), and more time grappling.

But we really spend a lot of time doing live rolling against resisting opponents.

This means that to get to black belt in Jiu Jitsu, we have to have demonstrated prowess against a lot of opponents. You can't just show up and get it!

Why not focus on getting a Black Belt

I want to address some reasons why I shouldn't set a goal for getting to black belt. Many of these are things I normally tell myself in other disciplines, and which I commonly hear in Jiu-Jitsu.

There are many obvious counterpoints to setting this goal of getting to BB* within five years.

All of these points are valid.

The better approach for progressing in Brazilian Jiu-Jitsu, the same one that I use for learning languages and other things, is to enjoy the process of doing it and not get too hung up on goals.

Why Decide to Focus on BJJ?

Firstly, I'm making this decision because I've fallen hard in love with BJJ. I like to stay physically active and to do it socially, and martial arts and sports are a great way of doing this.

The second reason is that focusing on BJJ encourages me to be creative with my training.

You can't really fake your way through BJJ. To advance, I'll have to really be systematic — showing up to class primarily, but also always addressing weaknesses and learning new things as I can.

There's little question that the BJJ pedagogical process is chaotic. At most gyms it's something like: show up to class, do some drills, then roll. People are expected to experiment and incorporate things they've learned into rolls, but the reality is that often, BJJ practitioners feel "stuck" doing the same thing over and over, and getting trapped the same way.

Many classes have a large range of experience levels. This means that you can easily spend too much time doing something that won't help you.

It's not just the BJJ group educational system that's inefficient. The same could be said of many disciplines, including language learning, or higher education. Many people will tell you, for example, that they learned everything they needed for their job on the job from a good boss, not from school.

How I'll do it

My main approach to learning Jiu Jitsu quickly is going to be the same one I use for learning sports and languages.

This is a similar approach to that which I've used for learning languages. My general approach is

It has worked for me for a while. In fact, most of my BJJ study is going to be in other languages, so it'll continue to work for a while.

In a nutshell: because I'm good at learning things quickly, I'm physically fit, and I have a lot of time (this is important!).

There's a few reasons I think this approach will work.

So I can train five days a week.

Let's see how this works out!

Caveats — Ways this play may get derailed

The main thing that's working against me in focusing on BJJ is that I'm old (I'm 41 already), and so my body will surprise me with aches and pains.

The second thing that age does is it changes life more quickly. My parents might get sick and need help. Or my partner might, or maybe her parents might. All those things will mean moving around and interrupting my training.

Another factor is that I change gym a lot. Because I tend to move around, I'm often with new coaches who don't know my strengths and may have different standards.

I'll keep going back to Sassom MMA in Brisbane, Australia, because that's where I started and my family live there. It'll be good to put my level to the test...

Of course, people go through many changes in their years of training.

I'll keep putting down updates on my BJJ plans and achievements as they occur. 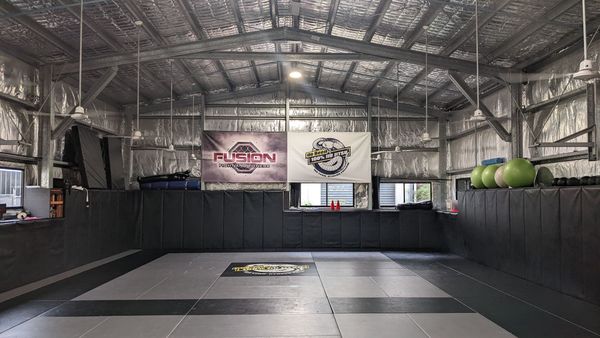 My Fusion Fight and Fitness Review — Training BJJ and Muay Thai in Cairns for three months. 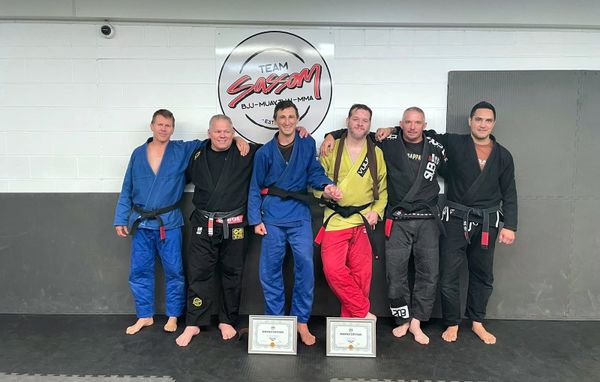