Seriously, just one quick tip. I tried to keep it all in the title, but in a nutshell it's this: ask a good question (of someone who can answer it).

This is one of those posts that nobody may see, but I'm hoping someone does and you find it helpful.

When I started out building websites, I found it very hard to get advice on how to get started. There are courses, e-books, and facebook groups, and I fumbled my way through a few of them (and my partner did a few others).

But the most helpful thing to me has been building a network of people I like who are doing things that are vaguely similar to what I'm doing.

For me, my network has been people who

There's just a few people I stay in touch with regularly, and I found them all the same way: saying "hey, I like that thing you're doing, let's hang out".

I tried a few ways of building networks, including

How I built my (tiny) blogging network

The one way I really found worked was emailing someone and asking them a question.

This isn't something new. People have been doing it in business for years. It's a famous hack for building a network.

In the past, I tried writing them an email and just saying "hey, you're cool". This is great, and sometimes it elicits a response, but not much of a dialogue.

Instead, I've shifted gears recently and started a new tack. Here's what I do next

The wording of the last step is critical — you have to get it right.

What kinds of questions to ask

If you want to get a response and build your blogging network, you have to ask the right kind of question.

A good question to ask is one a) that the person knows, b) that they know somewhat exclusively (i.e. you can't Google it), c) isn't commercially sensitive, and d) is relatively easy to answer.

For example, you might notice a company changed its name or rebranded, and maybe you're thinking of doing the same. This is a really difficult topic to google, and you wouldn't trust the opinions of randoms on the matter. So asking the opinion of someone you admire who seems to have done it well would be a good idea.

Similarly, maybe you're thinking of taking on investment and expanding. There are many pros and cons, and there are arguments both ways, so mentorship will guide you more than googling.

Having a good question is critical to getting a response. If you don't have one, don't reach out — it's kind of a waste of time.

Writing an outreach letter to get a response

The way in which you write an outreach letter is really important.

The first, golden rule, is: don't sound like spam. Spam emails generally are over-apologetic ("I know you must be inundated..."), don't say anything qualitative about the target, and talk too much about themselves. Don't be spam.

As someone in the earlier stages of building a media company, I'm pretty aware that I don't have much to offer this more experienced person. So I don't try to.

Instead, I just write humbly, with a tone of respect, and politely ask if I can get their advice.

Some things I don't do are

People who are experienced in business don't need coffee or lunch, and they have no reason to let you "pick their brain".

The only reason someone will talk to you is if they want to. And they'll only want to if they're a generous person and they like you.

So be likeable, and elicit that generosity.

Being likeable is hard. Sometimes it's easy because there's a vibe. Sometimes people write to me, for example, excitedly saying "I can't believe there's someone out there who's into coding AND motorcycles [or any other two things]. So am I!!"

Because of their enthusiasm and also because they sound cool, we become internet friends.

But if you have a few things in common, that part's out of the way. So how do you elicit generosity?

You can try a few things.

For example, sometimes I casually mention that I am also a generous person. Because people write to me and I help them out, I've said things like "Recently someone wrote to me and asked for advice. But it reminded me that I also would greatly benefit from advice, so I'm plucking up the courage to ask you."

Another no-brainer is to make it clear that you admire their work. Do your research into who they are and what they've done, and be specific in mentioning why you think it's cool.

Finally, be as brief as possible while also being courteous. Don't waste people's time with gushing praise or too much self-description.

Here's an example of an outreach letter for network building that encapsulates all the above, addressed to Sigfried Wolfang, founder of AwesomeLasers.com (this person doesn't exist... though the website probably does, and is probably awesome).

I've been a huge fan of AwesomeLasers.com forever. I've been into lasers since I was a kid and I've learned a lot from your website.

I really like your style (it's casual and informative), and the tone of your reviews. The layout of your blog is also one I really like... it's not over-stylised, nor over-simplistic. Just works well.

I also really enjoy the journey you came along. I know you've shifted from being an e-commerce store to a blog, and it seems to have worked well!

I'm way earlier in the website-building journey than you are. I have one in a different space (bicycles), but I actually am inspired by Awesome Lasers' journey. You're quite a way ahead, and I was wondering if you'd help me with a question.

Specifically I'm thinking of hiring a writer, and I would benefit from your thoughts on how to hire a third-party writer while also keeping the tone. I'm sure you've worked hard on that.

This is partly inspired by a younger person who asked ME for advice (in my field of specialty — I'm also a physiotherapist). And as I gave it out, I realised I'd also greatly benefit from some advice in another field — as well as nuggets of wisdom and things you've learned the hard way.

And anyway, even if you can't fit this in — thank you from a fan, I'll always be one!

I find that the above process works nearly every time — I usually get a response and it usually ends up in a call. I have only done it a few times, mind you, as I'm careful with it and don't want infinity contacts.

The main reason someone wouldn't respond would be because I targeted the wrong person. Maybe too high up, too far along in the industry, or with not enough things in common.

There's also a chance a competitor wouldn't respond. Why would they help you out?

Secondly, someone may not respond if I ask a vague question. I have done this before. Even if they do, those email threads go nowhere.

But anyway, because this method of outreach is quite effective at getting a response, please be selective in who you write to. Don't just throw these letters out willy nilly. Because you won't have time to have more than a few people in your network.

There you go. If you're thinking about writing to me — feel free! If I can help, I will, and if I don't have time, I'll tell you. 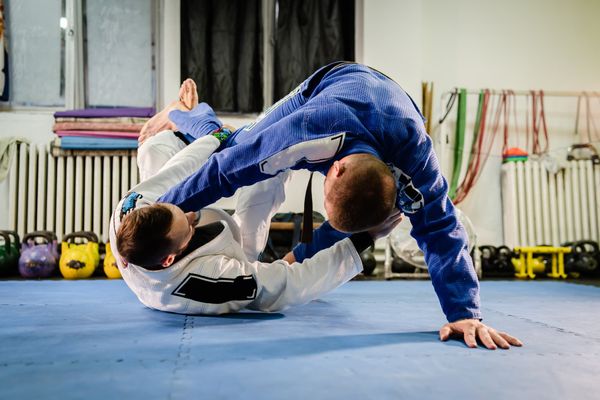 Chronicles of moving from CrossFit/powerlifting to BJJ — a review after month one.

How I went from weightlifting rookie to a powerlifting total of 1000 lb (455 kg) in seven years.