The Yamaha Ténéré 700 was released in late 2019 or mid 2020 depending on where you're from. People waited for years for it to be available! While it's an incredible bike, it left a lot of people wondering: what are a few motorcycles they could get right now that's comparable to the Ténéré 700 in specs?

There are a lot of options out there that are alternative middleweight adventure motorcycles. No two motorcycles are quite the same, but it's good to do a review of what's out there new right now. Or better yet... used!

Criteria for this comparison: All the motorcycles below are middleweights (under 800cc), more than one cylinder, and off-road ready — to varying degrees.

"Off-road ready" means they come with wind-shield, spoked rims with a larger wheel up front (19 or 21 inch), hand guards, and an engine guard.

So this comparison excludes

Overall recommendations: The KTM if money is no object!

Luckily, there are LOTS of alternatives to the Yamaha Ténéré that you can get right now.

See below for more details on each of these alternatives and how they compare to the Yamaha Ténéré 700.

The Ténéré was released in July 2019 in Europe (roughly at time of publication), in December 2019 in Australia, and in July 2020 in the USA, mid-pandemic.

Here are how the specs shake out. You can't ride a spec sheet, but it gives you an idea. So, enjoy!

A few things the Ténéré doesn't have that other (usually larger) adventure motorcycles have:

Reviews of the Yamaha Ténéré are generally ebullient. People can't wait to get their hands on them. And that's exactly why I'm writing this guide: because there are other alternatives to the Ténéré you can get your hands on right now.

People who change over from a bigger KTM or Africa Twin are happy after many thousands of kilometres.

The only complaint, if any, is that Yamaha didn't go far enough in making it light. Some people wanted it to be as light as a dirt bike.

The motor in the T7 is the same one that's used in the MT-07 and the XSR-700. That means it's a lumpy parallel twin with a beautiful note and torque all through the rev range. People LOVE those motorcycles, and you can just look on YouTube to hear the sound (and see people wheelie-ing them).

Yamaha claims its 689cc parallel twin is the most reliable motorcycle engine on the market. Bold claim, but if even directionally true, it's promising.

I've had the opportunity to ride a Ténéré and I did enjoy it. But if you're considering the alternatives — or just think it's too expensive — let's see what else we can get.

Overall the KTMs are lighter and more powerful than the Ténéré.

The KTM 790 Adventure (base model, not the higher model "R" spec) is more expensive than the Ténéré is likely to be. Everywhere but the US, the KTM model is about 25% more expensive, so we'd expect the same in the US.

That said... you get more than 25% more power, plus much better electronics (ride modes), and the same weight. So a lot of people will just say it's worth it.

There aren't really any unhappy owners of KTM 790 Adventures out there. Just people happy riding!

Even though the parallel twin is a first from KTM, they're no newbies to adventure motorcycle building. To make sure that the new motor would stand up to endurance sports, they ran a whole bank of engines for a collective 320,000 miles during R&D, just to make sure they were reliable enough, and to anticipate what would fail.

First, the specs, so you can ride that spec sheet:

BMW are the grandfathers of adventure motorcycling (well, Honda kind of created the appetizer with the Dakar, but BMW is the one that made the meal out of it).

The R1200GS is one of the most well-renowned touring adventure motorcycles of all time. It's beautiful, big, comfortable and capable of going anywhere... if you know how to move its heavy weight.

The F850GS (and the earlier F800GS) are the middleweight alternatives to bigger adventure motorcycles. They're very capable, with huge 200mm of travel on the suspension, a huge amount of rider aids and electronics, and anything else you'll need for very long rides.

The worst thing I've ever heard about the BMW adventure motorcycles is that they make adventure "boring". They can do anything. Rain, mud, potholes... they just cut through it all like butter. This is a weird criticism, though. If you want to make it harder, go touring on a Honda Grom!

The main downsides to the BMW are:

The upside is that you can buy a used F800GS from even a decade ago, and get a great bargain. You'll easily find a well-maintained motorcycle with a ton of options like ABS, heated grips, and luggage, and pay maybe US$5-7K for it. They hold their value, but that's still less than half the price of a new one with the same options.

And yes, if you buy yours new, it'll hold its value reasonably well, too.

The Triumph Tiger 800 XCx is the latest incarnation of the Tiger middleweight Adventure series. And it's the best! As of 2020, the Tiger 900 range has been released — but again, the 800 range was closer in spec to the Ténéré 700.

The Triumph Tiger has been made for a long time, but it used to be more road-oriented, like an early Ducati Multistrada. Later models, like the XCx, have all the things you need for going off-road: engine protection, hand guards, and big, wire-spoked wheels.

The result is that a Tiger is a great compromise between both worlds. You can load it up with luggage and go riding with another person on the back, or you can use it to just pop down to the shops and get groceries.

Like the BMW, they can come with every option in the menu if you want them: cruise control, heated grips, and a comfort seat. If you buy them second hand, you can effectively get a discount on a lot of these things.

But one of my favourite features of Triumph Triples is dat engine sound. Oh my. It is LOUD. It howls. With a good set of pipes on it (always used! I find it so hard to drop $1K+ on new exhaust systems) the Tiger Triple sounds as good as a Speed Triple.

Yes, off-road it's still a pretty big machine and will require heft to get it to do what you want.

Like with the BMW, the major downsides of owning a Triumph are factory service, and the expectation by future buyers that you'll have done factory service. Dismantling an adventure motorcycle even to do things like change an air filter is a huge pain in the ass (and one of the reasons I prefer naked motorcycles, generally).

For this reason, I'd suggest you buy a used one, so someone else has done all the service for you.

First, the specs for the V-Strom 650XT, so you can compare them with the Yamaha Ténéré:

The Suzuki V-Strom 650 XT, or the "Wee-Strom" as it's affectionately known by its rabidly loyal community, is a smaller V-Strom with minimum adventure gear fitted: a tall front screen, an engine guard, and hand shields.

But that's not all. The V-Strom is fitted with many things larger motorcycles only have as options. It comes standard with ABS, rider modes and traction control.

The Wee-Strom is known as being one of the most comfortable motorcycles to ride long range. And since they go over 430 kms (268 miles) on one tank, they are real favourites for the "Iron Butt Challenge" of going 1000 miles in one day.

On top of that, the V-Strom is affordable. It's easily the cheapest of the adventure motorcycles, coming in at US$9,299, 20% cheaper than the anticipated price of the Ténéré 700.

The downsides are that the suspension travel isn't as long, the engine is 10% down on power, and it's 5% heavier. So it's a more muted experience than the Ténéré 700 promises to be.

But there's another upside: the V-Strom has been around for a very long time. You can definitely pick one up used for just a few thousand dollars, or less for one with many miles on it. I've seen them go for $2K from dealers — with 50+K miles.

Still, this is the budget entry into middleweight adventuring, and it's the ultimate motorcycle for a LOT of people. 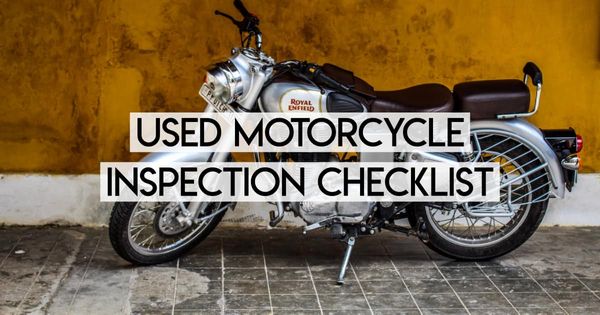 What to check when buying a used motorcycle - the ultimate checklist for motorbikes.

A history and buying guide guide to buying the Honda FireBlade CBR900RR, CBR929RR and CBR954RR, the original FireBlade series made by Tadao Baba.