After I low-speed crashed my Ducati 1098S I thought... it's time to up my skills. You know what they say — why upgrade the bike when you can upgrade the rider?

Besides, there's literally nowhere further "up" to go than the 1098S. There's newer, sure. But — aside from the 1098R — at the time there was no better sportbike in the world. It won races at the hands of competent riders. So there's clearly work for me to do.

I signed up for a two-hour session with Mark Langford at Queensland Motorcycle School for A$150 ($75/hr). They do rider training in a big empty car park right opposite the Big Pineapple. I said "just break down everything I'm doing, see what I'm doing wrong, and tell me how to improve."

Here's what I learned in two hours from my trainer Mark. They're notes for myself, but hopefully they'll be useful for others!

1. I need to drop my shoulder in to turns

Part of this, he said, was just that it was me on a new motorcycle. I was riding one of the school's bikes, a Honda Hornet CB600. (that I really enjoyed!)

The first thing Mark suggested I needed to learn to drop my shoulder in to turns.

What he told me to do was learned (for e.g. a left turn)

This way, I'd have my whole body left of the motorcycle. This would mean the motorcycle would turn left without leaning it as far.

Other parts of my cornering — looking deep into a turn and keeping my head up — he said I was doing fine. This, too, was a confidence boost.

The most important skill I learned on the day was how to brake harder into turns and accelerate out.

Before the course, I had a tendency to coast into turns with the throttle, and sometimes go on clutch during the turn (or even during the whole turn!)

First, Mark told me to use the brakes to slow down, and change gears while braking. This was fine, but I had to learn how to blip the throttle while keeping pressure on the brake.

The instructor noticed that I was using the engine to slow down rather than the brake. And that when I used the brake, I'd release the brake to blip the throttle.

All of this was transformative. I couldn't wait to apply it to my Hyperstrada on the way home.

A related skill to cornering fast was how to emergency brake.

I could brake, but I wasn't doing it as effectively as possible because I tend to think about both the clutch and the brake at the same time.

I felt I was braking badly because I had recently crashed my 1098S while doing exactly that.

The core of braking fast is: Think just about the brake. Everything else is secondary.

What I learned on how to better emergency brake

The goal is to be at a stop and in first gear, ready to scoot away if you have to (e.g. if a car is accelerating quickly behind you).

I need to become better at things like figure-eights and low-speed maneuvering. Luckily, they had a tiny figure eight for me to practise on!

These things are usually the devil for me — they remind me of the pinhead in the California driving test.

I knew it was theoretically possible. I had watched videos online. But I hadn't ever practised.

Counter-balancing while going around in a circle was quite hard. It meant keeping a really steady hand on the throttle.

The funny thing was that I thought I knew how to counter balance. But on reflection, the way I was counterbalancing was exactly opposite!

A few things I learned just for hygiene:

Mark also said I don't need to use the kill switch. I've now heard this from so many people that I suspect it actually might need to be true... major exceptions being, of course, if my key is in a weird place, or if I have a super modern motorbike with a keyless ignition.

A few other points... was the crash entirely my fault? Maybe not

I do accept responsibility (if for no other reason, because it's one of the principles of "Extreme Ownership" I cherish), but also know that there may be other factors that meant that the crash didn't have to happen.

This is making me think hard about whether I want to keep it. I thought maybe all superbikes were like that, but they're not. There are definitely some that are easier to ride. That was Honda's goal with the FireBlade, after all — to make it a superbike that anyone could ride fast.

Or I could just keep one of the best bikes in the world and grow into it.

Mark suggested I sign up for a track day with MotoDNA. Most of their classes are cancelled due to COVID, but I got in touch to see what I should book for.

I already have all the gear for a track day, so all I have to do now is get a track bike that I can take there.

I've sent them an enquiry. Let's see where this goes. 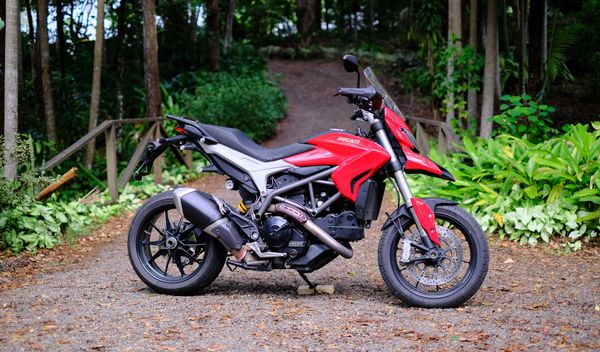 An honest review of the Ducati Hyperstrada 821 — the most practical (?) Ducati I've ever owned. 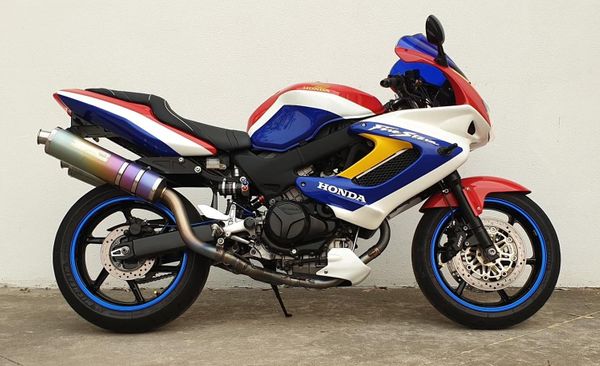 The most beautiful Honda VTR1000F (otherwise known as the Firestorm or SuperHawk) I've ever seen.