It's basically this: pick the path that will least likely lead to a regret down the line.

It's how he chose to start his business. It's how I chose to not join the Air Force, and go travelling instead. It's how I decided to quit my job and become a blogger, too.

So as I sell down my motorcycle fleet to buy just "one" motorcycle, I have to try to look back at all my riding history and forward at all the history to come, and think: what am I going to regret buying (or not buying)?

What are the situations that would lead to regret?

I'd eventually regret not buying a bike that isn't something that:

All of that makes for a pretty restricted list of motorcycles.

I thought I'd share this framework. Everyone has different priorities. You spend a while riding before you figure them out, and it's really hard to know what those priorities are before you start riding (other than it just being awesome). In the beginning, no bike is wrong; at the end, people like me become very hard to please!

If you like this way of thinking then I suggest you write down your potential regrets in a place where you'll never forget them (like on this blog) and then always look back at that list before you go buy another bike.

So what are the condenders, given all my potential regrets? See my list at the end.

I don't mind a sport position. I actually quite like it!

But even if I don't mind, I don't look forward to going a long distance in a sport riding position. So I have learned to really value a comfortable motorbike.

There's other stuff I don't really about riding a sport bike for long distances. One of these is the fact that I'll square off the tyres — which are often really expensive sport tyres. Right now on my 1098S I'm rocking Pirelli Diablo Rosso III tyres. They're not designed for rain, and they only last maybe 3-4,000 kilometres!

I do, on the other hand, greatly look forward to going for a long ride in the sport touring position (like my old BMW R1200S), or at least the "gently inclined forward" position (think Street Triple).

I suffer from tinnitus. I've had it for as long as I remember — probably childhood. For me, it's like a dull hissing sound in the background.

When I get hit by sustained wind noise over a long period of time it annoys me so much that it really takes away from what should be the joy of riding.

Unfortunately, this makes riding bikes like the 1098S a chore that I have to endure rather than something I can really "lean in" to.

ABS and Traction Control — So I can ride in the rain

A lot of motorcycles are just scary to ride in the rain. Anything with a lot of torque and no rider aids are fine, as long as you're careful on the throttle... but that isn't always possible!

I'd say that minimum spec for a modern motorcycle to be safe riding in unsafe conditions is traction control and ABS. A nice-to-have that's easily obtainable is cornering ABS.

So a starting point would be my list of motorcycles with cornering ABS, and to work down from there.

Seeing cornering ABS in action is pretty amazing. You go around a corner, grab a handful, and just coast safely to a stop.

Of course, regular ABS is already pretty good. In a world where not every motorbike may fit every criterion, I may make do with regular ABS.

I'm not an off-road rider. The most I go off road is when I get to the kind of road where you need a 4WD car.

Riding a sport bike on dirt roads is scary. And avoiding roads just because they're dirt roads is annoying! I want to be able to ride through, get to the other side, and keep loving life.

In Australia, Google Maps regularly takes me to roads that are just dirt roads. It may just show a winding road where the speed limit is 60 km/h, but where the implied average speed (from time to destination) is 40 km/h.

It's why I bought a Ducati Hyperstrada. I ultimately didn't keep the Hyperstrada 821, because it was too expensive and stressful to keep.

What I liked about that bike was that it was a "go anywhere" kind of machine. Definitely a road bike. I mean, it had sport tyres. But it was lightweight and had an upright seating position, so when I hit a dirt road I didn't panic — unlike how I feel on bulky sports bikes with no rider aids.

You can take any motorcycle off-road, of course. I mean, you can ride a Harley Sporster off-road. You can even ride a Panigale off-road — I once saw one with ridiculous tyres on it.

Still, riding some bikes off road would stress me out. For me, this includes bikes that are sport bikes and don't have any kind of traction control.

The Hayabusa, for example, doesn't have traction control AND is a sport bike. So while it meets pretty much every other criterion, it can't be that bike.

Cruise is one of those things that just makes me more likely to get on a bike and ride. If a bike has a few things that make life easier — like cruise control, luggage, and really wide service intervals — then I'm more likely to do things like go an hour away for an errand.

It IS possible to add aftermarket cruise control. There's a range of options, from things that just add friction to the throttle, to systems that plug inline to the throttle.

Tough and reliable — and probably Japanese

I'm tired of motorcycles breaking down and leaving me stranded (👀 Ducati).

I'm also tired of motorcycles needing one piece replaced that costs unnecessary hundreds of dollars, in part due to constant updates and a scant aftermarket (👀 Triumph).

For me, a great motorcycle is one I can just jump on and know it'll go. I'll have serviced it regularly, so the chain will be OK and the fluids up to date.

I do like spending time in the garage. But mostly, I like to do my own maintenance and various upgrades — not diagnosing what has gone wrong on an aging bike that has been through ten different pairs of hands. I mean, that's fun, just not for my one motorbike.

But I shouldn't have to worry about errant computer failures, sensors failing, or things like a pending spun crankshaft bearing on my Ducati superbike.

A motorcycle that's easy to service

Some motorcycles are just hard to service.

Take my old Ducati Multistrada 1000DS. To change things like the air filter, you had to remove the tank, which was REALLY HARD.

So what's the ideal? A naked bike with an in-line or parallel engine, air cooling, and shaft-driven. I can't think of anything like that out there! The closest is perhaps BMW boxer motorcycle like my R1200S — at least it was easy to get to the cylinder heads.

I would regret a bike that doesn't give me "that feeling".

There's a certain feeling of berserk-ness that I get from my current ride, a Ducati 1098S.

The Ducati 1098S I currently own is mental. Every time I hear it roar over just 40 km/h, something inside me melts. It's crazy. It awakens me like nothing else.

I have ridden just a few other bikes like this in my riding life: a Ducati Monster 900, a Triumph Scrambler 900, and a Suzuki Hayabusa.

On all these motorcycles, I hated to leave them behind. I didn't want to see them leave. It was a combination of looking, sounding, and feeling awesome.

Other, more boring bikes I've ridden... I can't even remember what it was like to ride them. Like my Honda Hornet 919, or a Kawasaki Versys 1000 I recently test rode. They left me with a "meh" feeling. In some ways you could say they "got out of the way and let me just ride", but I think I'm looking for more than just that.

I had to sell my 2014 Triumph Scrambler even though I loved every minute of riding it. I sold it as I was leaving the country. But I told myself: I'd own one again, one day. (Except they're not terribly reliable; another important criterion.)

I'd regret buying a motorcycle that isn't as tough as nails and reliable as hell.

For me, this pretty much means buying just Japanese... mostly.

Ducati motorcycles need frequent belt changes and valve inspections (that regularly result in valve adjustments). It's too much.

Aprilias too. I love them to bits. I have a Tuono on my dream bike list, or even the new RS660. But they have too much baggage and I'm just too scared to take one around Australia.

Triumph motorcycles have electrical problems. This can range from the benign loose wire to something stopping working and preventing the whole thing from starting. E.g. in EFI twins, the speedometer is an integral part of the CAN bus and the motorcycle won't start without it. Damn!

That said, Triumphs are fairly easy to repair, if you want to pony up the price for the parts. And they look so damn good.

Another contender is a BMW. BMWs are a mixed bag. The big oilheads and waterheads are NOT known for being reliable overall. But it's really the litlte things, like key fob failures, that leave people standed. The donk itself is good for 100,000+ kms. Again, if you want to pay for the parts, then a BMW is a contender.

So I'd really like my dream bike to be a Honda, Yamaha, Suzuki, or Kawasaki. But I'm open to being convinced otherwise.

Just a note — not every Japanese bike is reliable. Africa Twins have known to be somewhat problematic, for example.

Below is a table my contenders.

I considered all these bikes... but in the end, I could have included many more. In the end, I chose (and bought) a BMW S1000R. You can read my buyer's guide to the S1000R here.

Apart from that, I love this bike. It's everything. It does everything perfectly. After riding it, I'm never annoyed. I've been annoyed in some way by every other bike I've had, so this is a welcome change. 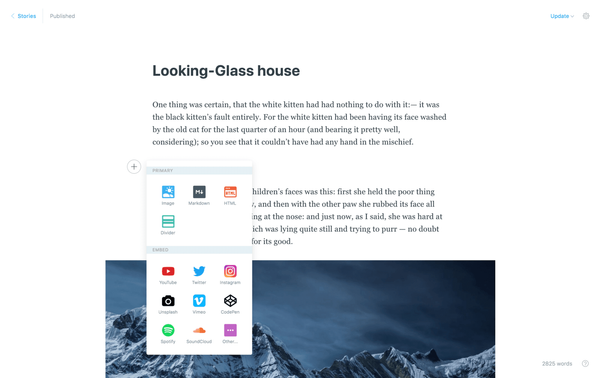 My Ghost review, updated for — comparing it to WordPress, Squarespace, and Medium, and concluding that Ghost is still the best simple blogging platform.

All the reasons I could stand to find why you shouldn't vote Trump.