I found the Ninja H2 range with all its letters confusing, and so read everything I could find, and spoke to dealers, until I figured it out. Here's what I found.

The Kawasaki Ninja H2 range (well, also the Z H2) is Kawasaki's range of motorcycles that are famous for their commercially available high-power supercharged 998cc engine.

There are some things common to all of the H2 range. They all have the same base engine concept — a supercharged 998cc liquid-cooled 4-cylinder 4-valve engine — although the H2R's engine shares so few components it might as well be totally different.

The chassis is similar across the H2 range, too, with a stunning trellis frame and a single-sided swing-arm (which only the hyper-naked Ninja Z H2 loses).

But other things change between models in the Kawasaki H2 range, like some engine internals (changing the compression ratio and the strength of the cylinder heads), supercharger pressure, and external components.

I find the nomenclature and recent history a bit confusing. There are so many letters! Which Ninja H2 is the best to buy? Which have the most features, and which models were produced when? This is what I was trying to find out, and this is the result of my search.

I write regular articles on motorcycles, vehicle technology, and sometimes other topics.

In brief, there are four kinds of Kawasaki Ninja H2 motorcycles:

More detail on all these below.

The Ninja H2 was the first model in the Kawasaki Ninja H2 range. It was released in 2015 to much acclaim as being a production supercharged sport bike (not the first one in history, but the first in recent history).

The Ninja H2 and H2 Carbon are the street-legal sport bikes of the H2 range. They have a sport riding posture, superchargers, and massive amounts of power and torque. But they're both street legal, unlike the attention-grabbing H2R.

The H2 Carbon is barely different from the H2, with a carbon-fibre cowl, a colour change, and a numbered stamp. But it's more exclusive, which matters to the select few buyers who put a deposit down for them.

It already came with a whole bunch of rider aids, including KTRC (Kawasaki's abbreviation for their branded traction control) and KIBS (Kawasaki's name for ABS). But the original 2015 models lacked Kawasaki's cornering ABS (KCMF).

There have been some revisions to the H2 and H2 Carbon over the years — some minor, some major.

There are rumors of a more powerful 2021 Ninja H2, but I'm not sure yet, and COVID might change that or cause it to be delayed.

Kawasaki Ninja H2 vs Ninja H2 Carbon — What are the differences?

Reading the word "Carbon" I wondered: what are the differences between the H2 and the H2 Carbon? Is it lighter, for example? (It's not.) Does it have better components like tyres, suspension, or electronics? (It doesn't.)

It turns out the differences between the H2 and H2 Carbon are minor.

The Ninja H2 Carbon has, on top of what's offered by the Ninja H2:

The weights, according to the spec sheets on Kawasaki, are identical.

The Ninja H2R is the most extreme of the Ninja H2 range. It's not street legal (track-only), and it's obscenely powerful!

The first Ninja H2R was also released in 2015, alongside the Ninja H2.

This absurd amount of power is much more, for example, than the other already absurdly powerful motorcycles on the market, like the Yamaha R1, the Suzuki Hayabusa, or another from Kawasaki's range, the ZX-14R.

Needless to say, it's extremely fast. To prove this point, on June 30, 2016 Kenan Sofuoglu reached 400 kmh (249 mph) on the newly built Osman Gazi Bridge in Turkey (a massive bridge that's over 2km long). The bike was stock, had special Pirelli tires to cope with the speed, and the pilot was wearing a special one-piece leather suit to cut down on drag.

The main differences between the 2015 Ninja H2R and the Ninja H2 are:

On top of things it has, the Kawasaki Ninja H2R also lacks things necessary to make it road legal, like turn signals, mirrors, and a license plate holder.

It's safe to say that most readers of this blog aren't in a position to buy an H2R. If you are, great. But most humans in general aren't! The H2R is so exclusive it's almost invitation-only.

Every year, Kawasaki allows a few people to pre-order the Ninja H2R on a first-come, first-served basis.

There's no warranty on the H2R, unlike the regular Ninja H2.

Evolution of the Ninja H2R — Changes year by year

So in summary, the engine of the H2R hasn't changed since launch. 2019 was the last real update, but the only things that changed were brakes, a better display, and better paint. The most meaningful update was 2017, when KCMF was added.

How does the Kawasaki Ninja H2R make so much more power?

This is what fascinates me most about the H2R. How can an engine that shares a naming convention with the Ninja H2, an already very powerful engine, make 50% more power (comparing 2015 figures)?

Kawasaki is very secretive about the internals of the H2R. But here's what I've been able to gleam.

Per Rideapart, "The H2R is simply not an H2 with a different, more aggressive tune and stronger head gasket—far from it. It's, in fact, built in a special facility off the assembly line. All hand built with particular care, it took the plant roughly one business day to produce a single H2R."

Here are the differences

The H2 SX range are the sport touring versions of the Kawasaki H2. They have a much less aggressive riding posture than the Kawasaki H2 does, and a slightly less powerful motor than current H2 MOTORS.

This sport touring range includes the SX, the SX SE (which has a few more options as standard), and the SX SE+.

It's the sports tourer that most people will want to buy (unless you like to go really fast all the time... do you? DO YOU? Because you can with this!). It's more practical, and still bonkers enough.

You might ask yourself "why the heck would I need a supercharged sport touring machine?" Similar questions were asked before the launch of the Hayabusa in 1999. That was no slouch, with a 1300cc 130 kW (175 hp) engine. The Kawasaki ZX-14R followed suit, and then did the BMW equivalents.

The original Ninja H2 SX was released in 2018. It debuted with KCMF (cornering ABS), which the Ninja H2 had acquired the previous year.

Difference between the Ninja H2 SX and H2 SX SE

See what I mean by lots of letters in the Ninja H2 range?

In 2019, the Kawasaki Ninja SX SE was updated and replaced by the Ninja SX SE+. The updates included

In 2020, Kawasaki released its Z H2 — their naked/streetfighter version of the supercharged H2.

The Z H2 is a Ninja H2 SX without a fairing and with handlebars, if you will.

At the heart of the Z H2 is the H2 SX’s supercharged 998cc motor, although it’s been re-tuned for the Z to give more mid-range thrust, making its whopping 101 ft-lb of torque at just 8500rpm (1000 less revs the H2 SX requires), with a slight drop in power.

The retuned engine from the Ninja H2 SX still produces similar peak power to the original 2015 Ninja H2, though, with 147 kW (197 hp) at the crank. It uses the 69 mm impeller "balanced" supercharger from the Ninja H2 SX's motor. All this means that the Z H2 makes more power than most of its contemporary rivals.

There’s a stack of IMU controlled electronics to stop the engine tying everything in knots including three riding modes, lean-sensitive traction control via a six-axis IMU, ABS, and launch control.

The new Z also weighs a significant 17kg less than its H2 SX brother (239kg claimed kerb weight against 256kg for the SX) with much of that saving coming peeling off bodywork.

Other major changes to the Kawasaki Z H2 include

The Z H2 still comes standard with touring things like a quick shifter and cruise control.

Another major aesthetic difference between the Z H2 and the Ninja H2 are is the double-sided swingarm.

This is the name for Kawasaki's self-healing paint. This is just a quick word on a feature I JUST learned about, reading about the H2 range.

"Self-healing paint" sounds crazy, right? Well, it's not magic. But it's a step towards it.

Kawasaki's "Highly Durable Paint" (their name for it) has a special top coat that allows certain types of light scratches that occur through normal wear-and-tear to repair themselves. This means the finish is always very high. (It won't take care of big scratches, like those caused by getting keyed.)

According to Kawasaki, the paint-self heals with "microscopic soft and hard segments within the top coat working like a chemical spring, creating a trampoline effect that absorbs many impacts". Not sure what this means, but it sounds to me like it's a resilient plastic.

I can't wait to see this applied across more of the Kawasaki range. 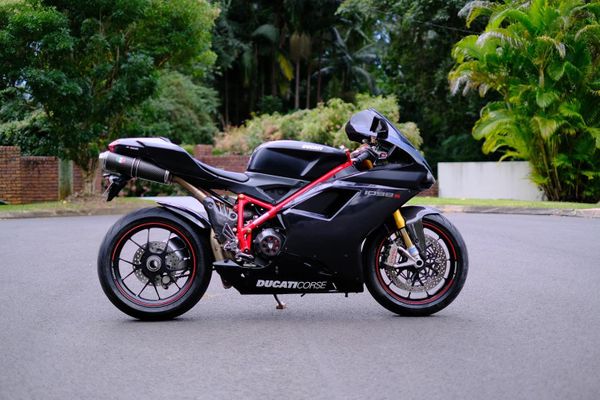 A no-holds-barred review of my Ducati 1098S, only my second love in the history of my motorcycling life. 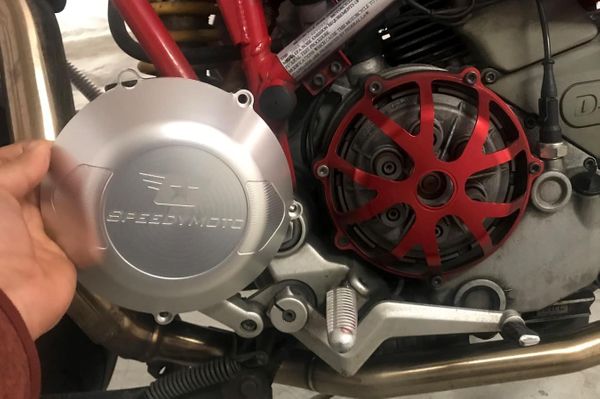 How to replace dry clutch springs on a Ducati motorbike. Rusty springs? No problem.