Cruise control is controversial. Purists say you don't need it; those without it say you can add a throttle lock to get 80% of the way at a fraction of the cost; and those who've had electronic cruise control claim there's no real substitute.

Yes, you can add cruise control to many motorcycles, from throttle locks all the way to advanced systems that play with the motorcycle's electronics, like those from the Australian company MCCruise.

But, even those those modifications all work and are fine, I really prefer it generally for my workhorse, reliable, everyday motorcycle, when motorcycles come stock with advanced systems. There are a few reasons for this, including a system being better integrated with a motorbike visually and electronically, to not losing value on expensive add-ons when selling the bike. Even the awesome well-integrated systems from MCCruise dont' look visually perfect and cost north of US$500, and up to nearly US$1,000 for some systems.

Let's start with the obvious — a lot of high-end touring and sport-touring motorcycles come with cruise control. Nobody would be surprised to see that you can get a touring-focused motorcycle like a Ducati Multistrada, BMW R 1250 GS, a Yamaha FJR1300, or a Honda Goldwing with cruise control as standard. I've got a starting point list below of the usual suspects with cruise control, too.

What's more surprising, to me, is the other motorcycles that are cool, sporty, or adventurous — and maybe not even top of the line — and that have cruise control either standard or as a surprising option.

Surprising motorcycles with cruise control (standard or optional) include:

Noting the motorcycles out there with cruise, I also thought it worthy to have a brief list of motorcycles that are surprisingly without cruise control.

The Unsurprising Motorcycles with Cruise Control

In fact, Honda and Harley-Davidson have had cruise control on some motorcycles for decades. Since the 1980s, before the internet was a big thing!

But there are some notable omissions from this list, too. I've included this at the end — motorcycles that surprisingly don't have cruise. Like the competitors to some of the above. Seems some manufacturers were either asleep at the handlebars, or maybe didn't want to pay for patent licenses.

This is really a cool addition to a sports tourer with a forward-leaning position, even if the handlebars aren't that low. It still has a fun and rev-happy 140hp in-line four that has a raucous intake how.

The Ninja 1000's bigger brother, the Versys 1000, got cruise control in 2019. But being an upright touring bike, that's a less surprising bike on which to have cruise.

Many BMW motorcycles have cruise control. Nobody would be surprised to find out big tourers like the K1600GTL or R1250RT have cruise.

There are very few sport motorcycles with cruise control on the market — the Aprilia RSV4 is the only other one with it. The superbike/litre-bike class includes the Honda CBR1000RR, the Yamaha YZF-R1, the Suzuki GSX-R1000, the Ducati Panigale V4 and V2, and the Aprilia RSV4... only the Aprilia has cruise (it got it in 2017).

Cruise is also an option if you get the "sports" package on other motorcycles in the S1000 line-up. It's still a really cool option to have on the S1000R, but a less surprising one on the touring-focussed S1000XR (actually, I'd be a bit miffed if I had an XR without cruise). But having cruise as an option was a reason I opted for the 2017 S1000R as my bike of choice.

Another street bike from BMW that has cruise control is the 2020 BMW F900R, the long-awaited update to the F800R.

The F900R is a really awesome street bike that's totally packed with features and available for a really affordable price. It's basically as well-featured as the S 1000 R, but with about 2/3 the power, and half the cylinders. So, less frantic, but just as refined.

Some reviewers do say the fuelling isn't spot-on, either, but that's an opinion not shared by everyone.

What's remarkable (to me) is that this is a mid-powered, modestly-priced standard motorcycle from BMW. It's not one of their "premium" bikes like the R 1250 RS or K1600GTL that you'd expect to have cruise. It doesn't even have a fairing — it's not designed for the wide open road! So for this motorbike to have cruise is pretty special, a bit like seeing cruise control on an SV650.

It's unsurprising that the R1, Yamaha's 200+hp superbike, does not have cruise control — even though with ride-by-wire it should be a trivial addition. I mean, that's a high-power sport bike, where ever gram matters.

But what is surprising is that the "streetfighter" version of the R1, the MT-10, has had cruise control as standard since launch!

The MT-10 is a fire-breathing standard bike that puts out a claimed 158hp (138 hp at the rear wheel as measured on the dyno), using the crossplane engine from the Yamaha R1, but detuned to produce peak torque and power slightly lower.

The MT-10 has also been released in "touring" version since 2017, complete with a couple of small tail bags and a windscreen.

The Honda Africa Twin is a bit of a unicorn right now, unique in its line-up.

It's hard to put this very succinctly, but there are very few adventure bikes that people (reviewers, users) say are as well-placed to do both off-road work and chew up highway miles as the Honda Africa Twin.

A few other motorcycles in the category are the Yamaha Tenere 700 and Suzuki V-Strom 1000 — but those don't offer cruise control (surprising, for the V-Strom!).

One complaint about the cruise on the Africa Twin is that the controls are on the right hand side. This means you have to set cruise with the same hand that's adjusting the throttle. This can be more fiddly than setting the cruise with the left hand, like nearly every other motorcycle.

Some larger adventure-focused motorcycles like the BMW R 1250 GS and Ducati Multistrada do have cruise, but that's less surprising given their brand names, the price you pay for those bikes, and the fact that they're more road-going.

One other similar bike to the Africa Twin that has cruise is BMW's smaller F 850 GS and F 900 GS — but to me that's less surprising coming from BMW (sorry, very subjective, I know!).

Cruise control is standard on the FTR1200 line from Indian. Because as they put it: "Because once you head out, you’re bound to be going for the long haul."

This is pretty cool of Indian, but particularly cool given that the FTR is not your average touring motorbike. It's really more like a naked muscle bike, with its pondering huge V-twin and lack of fairing protection.

The Triumph Rocket III 2020 model is pretty amazing. Just look at it!

It's also a very attractive motorcycle to look at, one of the best-looking motorcycles of 2020.

So it's not really surprising that a premium bike can have cruise control, until you look at it and realise — this is really far from a long-range motorcycle! It is a big naked motorcycle without even a windscreen and with a range of only ~150 miles.

Which are the cheapest motorcycles with cruise control?

A corollary to the above is to consider motorcycles — and sometimes entire brands — that surprisingly don't offer cruise control.

For example, Suzuki doesn't have cruise control anywhere in its line-up — despite having some very capable touring motorcycles, and ride-by-wire equipped in the latest models. The Suzuki Katana, for example, has great ride-by-wire — but no cruise. Ditto for the Suzuki V-Strom 1000. Both those Suzuki motorbikes even have cornering ABS and traction control — but no cruise.

Similarly, no motorcycle in the Ducati line-up has cruise control other than the Multistrada. This is a bit surprising to me given that it's a premium brand, and that Ducati has had ride-by-wire for years. If BMW can do it, then Ducati definitely can.

Finally, I find it surprising when premium sport tourers that already have fly-by-wire don't offer cruise. For example, the Kawasaki Concours GTR1400 — to say nothing of its sportier sibling the ZX-14R, and the Honda ST1300. Since the early 2010s these motorcycles have had traction control and power modes managed via ride-by-wire throttle — but no cruise. 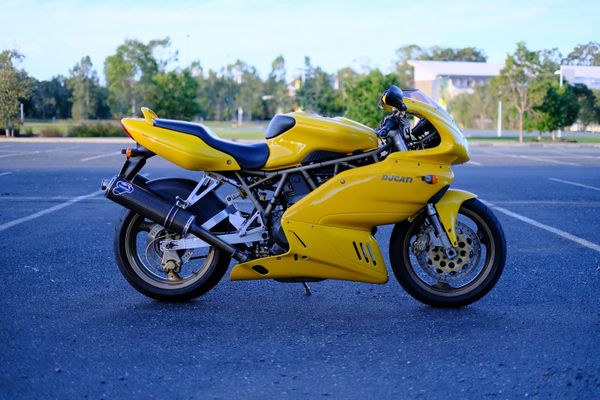